To share your memory on the wall of Herbert "Jack" Radabaugh, sign in using one of the following options:

Provide comfort for the family of Herbert "Jack" Radabaugh with a meaningful gesture of sympathy.

HERBERT M.RADABAUGH, 15377127, Staff Sergeant, Army Air Forces, United States Army. For extraordinary achievement while serving as left wait gunner on many high altitude heavy bombardment missions against the enemy over Continental Europe. Sergeant Radabaugh repelled numerous hostile fighter attacks by his excellent mark manship, thereby assuring the safety of the crew and aircraft. The courage, presence of mind and devotion to duty while engaged in aerial combat on all these occasions are in keeping with the highest traditions of the United States Army Air Forces.

In lieu of flowers contributions may be made to the Harrison County Humane Society 2450 Saltwell Road, Shinnston WV 26431

Online memories and condolences may be shared at harmerfuneralhome@gmail.com
A service of Harmer Funeral Home, Shinnston.
Read Less

Print
A graveside service will take place on October 4, 2019 at 1:30 PM at the Shinnston Memorial Cemetery

We encourage you to share your most beloved memories of Herbert "Jack" here, so that the family and other loved ones can always see it. You can upload cherished photographs, or share your favorite stories, and can even comment on those shared by others.

Posted Oct 04, 2019 at 03:52pm
Jack was the brother to our Uncle Bob and Aunt Helen. Aunt Helen was my mom's sister, Mary Pigott Brown (Vance). We got to know Jack that way. Mostly after our dad passed. Jack and mom started going out to eat, etc. after dad passed. He was good to mom. I remember a funny story mom told us. One Christmas Jack brings mom a gift and she placed it under the Christmas Tree. The two of them went out to eat. Upon returning, they found out that our youngest brother's (Brad) dog sniffed out the package. She managed to get into it and had a good treat of assorted chocolates. We laughed for sometime.
We are sorry to hear of Jack's passing. We all liked him. The family of Mary Pigott Brown - Sharon Gray, Linda Clark, Roger, Ronald and Steven Brown.
Comment Share
Share via:

Posted Sep 21, 2019 at 02:44am
I remember my grandfather, Clyde O. Southern, talking about Jack Radabaugh and how they were related am to us ...... sure am sorry to hear of his passing.....our family circle is getting smaller with him and my loving Aunt, Eleanor Southern, gone HOME this year. They will be missed deeply. from Mary Lou (Dixon) Caraway Stevens from Tn. 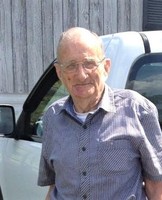