To share your memory on the wall of Charles Mihelic, sign in using one of the following options:

Doctor Mihelic was preceded in death by both his parents, Carl and Catherine “Mimi” Mihelic (Waitkoss) and his stepfather Cecil “Babe” Waitkoss. Many are left who mourn him, and in whose memories he lives on. A complete roll-call here would be impossible, but it starts with his loving family: Wife Mary Mihelic of Shinnston; brother John Patrick Mihelic of St. Joseph; Daughters Amanda Mihelic and Catherine Schlobohm; Sons John Edgar Mihelic and Norman Mihelic; Niece Emily Mihelic; Nephew John Joseph Mihelic; Son-in-law Scott Schlobohm; Daughter-in-law Anita Mihelic; and grandchildren Lilly Rae Wissler, Joseph Gary and Bonnie Louise Schlobohm. We are remiss not to mention the many friends of the family for whom he served as a mentor and a father figure. He will be greatly missed by many.

Visitations will be held from 2 pm to 4 pm and 6 pm to 8 pm at Harmer Funeral home in Shinnston, WV on Thursday February 6th, 2020. On Friday the 7th, a Celebration of Life will be held at the American Legion in Shinnston from 5:30 pm to 9 pm. We invite all friends, family, and past coworkers to attend these functions and celebrate the life of a wonderful husband, father, healer, and friend to many in the community.

In lieu of flowers, he requests that donations can be made in his name to Wounded Warriors or the Harrison County Humane Society.

Online memories and condolences may be shared at Harmerfuneralhome.com.
A service of Harmer Funeral Home, Shinnston.
Read Less

To send flowers to the family or plant a tree in memory of Charles Joseph Mihelic, please visit our Heartfelt Sympathies Store.

We encourage you to share your most beloved memories of Charles here, so that the family and other loved ones can always see it. You can upload cherished photographs, or share your favorite stories, and can even comment on those shared by others.

Stacey Gray, Greg Ellis, and other have sent flowers to the family of Charles Joseph Mihelic.
Show you care by sending flowers

Posted Feb 09, 2020 at 11:02pm
Prayers and sympathy for the extended Mihelic family. We see John on a regular basis and were good friends wth Charles' parents and with Babe. May he rest in peace. Charlene and Bob Slatyer, St. Joseph, MO
Comment Share
Share via:
PS

Posted Feb 08, 2020 at 03:13pm
Family and Friends,
I’m soo very sorry to hear of Chuck’s (Dr. Mihelic) passing. We were in the same high school graduating class 1969 of Christian Brother’s & Le Blond. It doesn’t surprise me of all of his accomplishments. He was a great guy, fun,polite and ever so respected.
My prayers are coming your way.
God Love You and God Bless You
Patti Snead Saint Joseph Missouri
Comment Share
Share via:
SG

Posted Feb 06, 2020 at 03:56pm
Chuck was our 2nd cousin. I worked with him in the ER at the formerly named, Heartland Hospital. He was a great guy and the ER was sad to see him move. He came from a great family. ❤️
Comment Share
Share via:
BB

Posted Feb 06, 2020 at 01:26pm
Chuck and I grew up together on the South Side of Saint Joseph Missouri just 5 houses apart. He and I were in the same Communion class at Saint Stanislaus Catholic Church in 1958 (I still have that photo). Chuck had a great work ethic and had great parents as role models. He was a great friend and always did the right thing as a young man growing up. Chuck played football for Christian Brothers at nose tackle and I played quarterback for Benton High School and we would talk after games. After high school, we lost contact with each other but it sounds like he did a lot of great things in his lifetime. Seeing his picture in the obituary brought back many memories of Chuck as we were growing up. I am sorry that Chuck passed at an early age. God bless Chuck and his family. 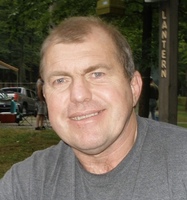