To share your memory on the wall of Betty Talerico, sign in using one of the following options:

After a brief illness, Betty Jean Talerico, 91, of Bridgeport, passed away peacefully at United Hospital Center and went to be with the Lord on Saturday, April 18, 2020.
BETTY JEAN TALERICO
Former Teacher and Reading Enthusiast

After a brief illness, Betty Jean Talerico, 91, of Bridgeport, passed away peacefully at United Hospital Center and went to be with the Lord on Saturday, April 18, 2020.

Betty was born September 6, 1928 in Bridgeport, WV. She was the daughter of Carl L. and Chloe Irene Nuzum.

Mrs. Talerico was a graduate of Mannington High School; and after marriage and children, returned to academia by attending Fairmont State and WVU to obtain teaching degrees

She was a retired Shinnston/Lincoln High School teacher, who loved her students. After retirement, to continue interacting with young people, she took on the role of sorority house mother at WVU. Betty loved spending time with her grandchildren and great-grandchildren and had a love for professional sports – Michael Jordan being her favorite athlete. However, her favorite hobby was reading. She never missed reading as many newspapers as she could get her hands on. Her love for reading led her to work part time and volunteer at the Bridgeport Library.

Surviving are a son, John (Karen) Talerico of Bridgeville, PA and a daughter, Kathy Milam of Bridgeport; 4 Grandchildren: Michael (Xuelai) Talerico, Patrick Milam, Mark Talerico and Tara Talerico; 2 great-grandchildren, Macie Milam and Clara Talerico. She is also survived by her brother, Carl (Junior) Nuzum and many nieces and nephews.

Private Visitation and Funeral Service will be held for the immediate family. A celebration of life will be announced at a later date.

Interment will be at Shinnston Memorial Cemetery, Shinnston,

Online memories and condolences may be shared at www.harmerfuneralhome.com

There are no events scheduled. You can still show your support by sending flowers directly to the family, or planting a memorial tree in memory of Betty Jean Talerico.
Plant a Tree

We encourage you to share your most beloved memories of Betty here, so that the family and other loved ones can always see it. You can upload cherished photographs, or share your favorite stories, and can even comment on those shared by others.

Posted Apr 26, 2020 at 09:54pm
The family of Betty Talerico, Very sorry to hear of Mrs. Talerico passing. She was a great teacher learned a lot from her. She will be missed. I pray God will wrap his loving and comforting arms around each of you. God bless.
Comment Share
Share via:
BH

Posted Apr 23, 2020 at 01:37pm
Aunt Betty was so much fun to be around every time I called her she would ask a question by saying "Now Brenda tell me." We didn't see either much but we exchanged Christmas cards every year with notes. Johnny and Kathy my thoughts and prayers are with you and your families. Love you all
Comment Share
Share via:
JT

Brenda, it's so nice to hear from you. I would love to see both you and Jack. Thanks for the thoughts and prayers. Please keep in touch and send me your mailing address. It's been a tough few weeks and with the virus, the funeral was not what we would have wanted to have. Stay safe and take care.

Thanks for the kind words, She loved her students.
PD

Posted Apr 20, 2020 at 06:59pm
Our thoughts and prayers are extended to the entire family. John often talked about his mom and how blessed he was along with all the family and friends of Betty. Your memories of Betty will never die, those are the things to hold onto and thank God for. The way she touched each of your lives will continue to live on through each one of you. Love, Pastor Joe DiDonato, my family, friends from The Meadows Track Chapel and the overall Meadows Community.
Comment Share
Share via:

Pastor Joe, you have been a great friend to our family throughout the years. Thank you for the kind words and the prayers. 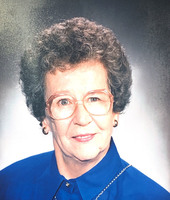